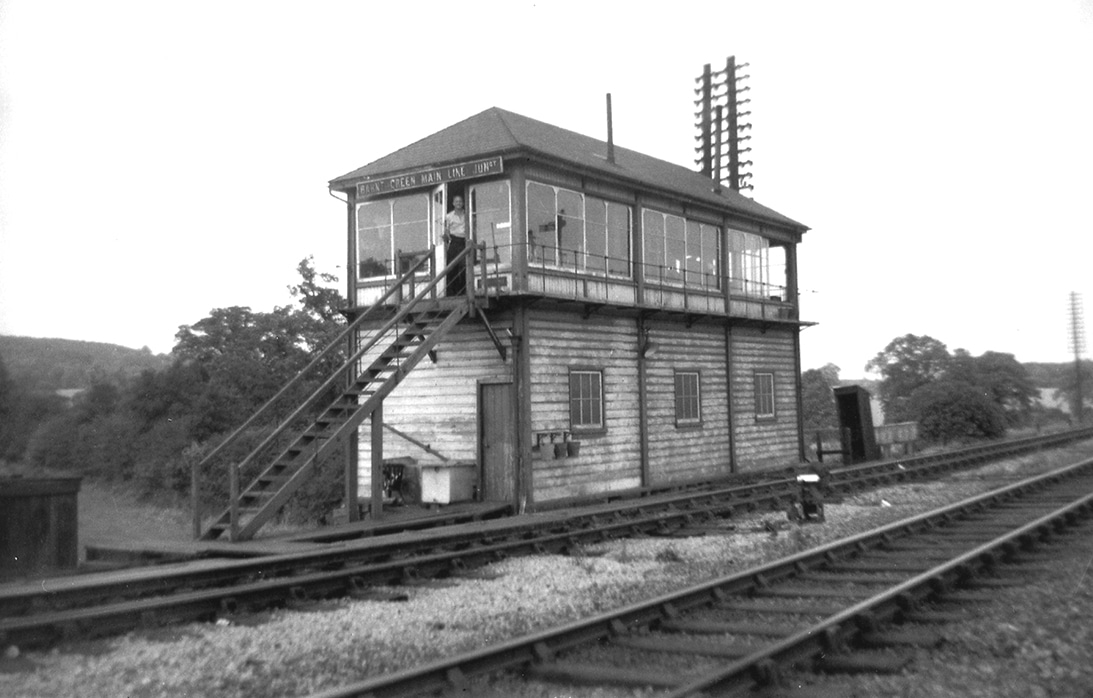 Fifty Years On  A ‘GOLDEN JUBILEE’

(In more ways than one)

Featured Photograph BY PETER HANDS TAKEN ON A BROWNIE 127 : A close‑up of Barnt Green signalbox, a former Midland Railway structure. The nearest boxes to Barnt Green were at Blackwell (top of the Lickey Incline) and Halesowen Junction. Standing at the top of the steps is my signalman, Gordon Morgan, who eventually served forty‑nine years on BR. Originating from Llandrindod Wells, Gordon, who sadly passed away in 1993, became my stepfather in June 1965.

Monday 13th April was a red‑letter day for me, for after three years of boring office and shop work after leaving school at fifteen years of age, at last, long last, despite my mother’s objections, I had fulfilled my dream of working in a signalbox on British Railways, initially as a train reporter to Birmingham and Gloucester Controls.

My original interest in signalboxes commenced in the late 1950’s at Shirley station on the North Warwickshire line, where, on many a summer Saturday evening I would wait with bated breath for the succession of passenger trains packed with holidaymakers returning from the West Country resorts to Birmingham (Moor Street), Snow Hill and Wolverhampton (Low Level), hauled by GWR locomotives from far‑away depots such as Laira (Plymouth), Newton Abbot and Penzance, most of which would be ‘cops.’ 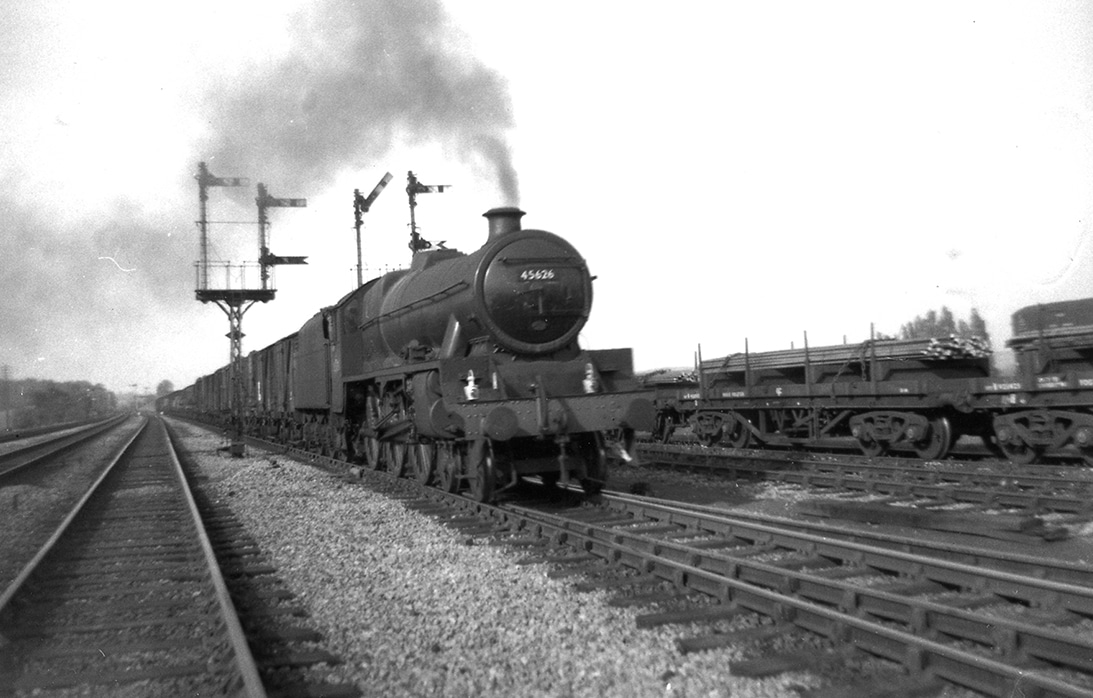 Above Photograph by Peter Hands taken on a Brownie 127 : LMS Jubilee Class 4‑6‑0 No. 45626 Seychelles, of 55A Leads (Holbeck), darkens the skyline as it accelerates a fully fitted freight out of the down slow line at Barnt Green on 17th September 1964 and heads for Cheltenham, Gloucester and beyond. The sidings to the right of Seychelles were occupied from time to time with vandalised coaches from football specials ‑ the usual things ‑ slashed seats ‑ broken windows ‑ light bulbs etc.

In between trains I was fascinated by the sounds of the ‘bells’ and ‘signal levers’ being operated inside Shirley box (no longer with us, sadly) and from time to time Frank Docker, one of the signalmen, would invite me inside his domain, where I could only stand in awe whilst he effortlessly went about his daily routine. How I envied him and vowed to myself that one day in the future, I too, would work in a signalbox.

However, as I grew older my interest in signalboxes waned somewhat, that is until January 1964.  A spotter pal of mine had secured a position in the ticket office at Hockley station on the Wolverhampton side of Snow Hill and during the course of popping in to see him from time to time on my moped I eagerly took advantage of invited opportunities to visit both boxes at Hockley – South (fully manual) – North (motored semaphores operated by tiny levers) – reawakening my dormant interest. 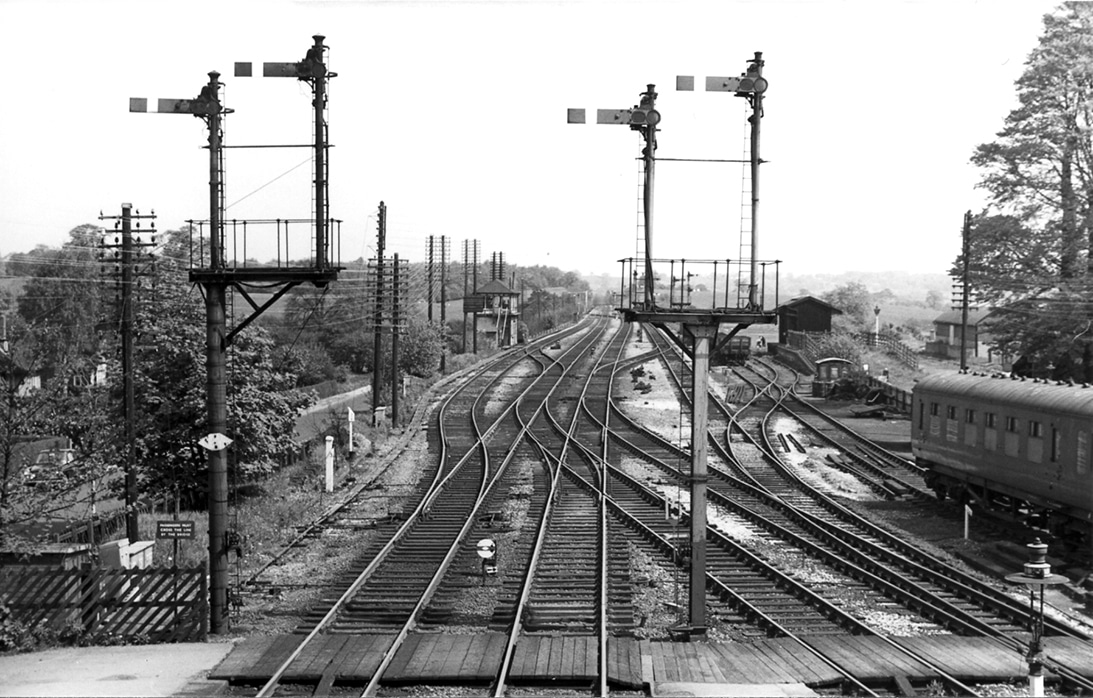 ABOVE PHOTOGRAPH BY PETER HANDS TAKEN ON A BROWNIE 127: A panoramic view of the layout of Barnt Green station in 1964 looking towards Birmingham from the footbridge. In the left of the frame are the up signals for the slow and main up lines from Bromsgrove. The signals to the right guard the access line from Redditch and in the left distance is the signalbox.

So, in late March 1964 I paid a visit to Stanier House in Birmingham City Centre, where, after a short interview, I was offered the position of signalbox lad at Barnt Green, which, suffice to say, I grasped with both hands.

Thus it was that I arrived at Barnt Green on my moped on a lovely spring day in mid‑April to begin my signalbox career and it was manna from heaven after my previous employments – fresh air – the sun was shining – the lovely backdrop of the Lickey Hills‑ and – most importantly of all the sights and sounds of steam.

My task, as previously mentioned, was to report the times of the passing trains to Birmingham and Gloucester Controls. To my everlasting regret I did not keep a personal record of all the steam engines which passed the box during the six (happy) months I spent there before departing for pastures new in late September 1964, but having said that, my records are still pretty comprehensive, thankfully. 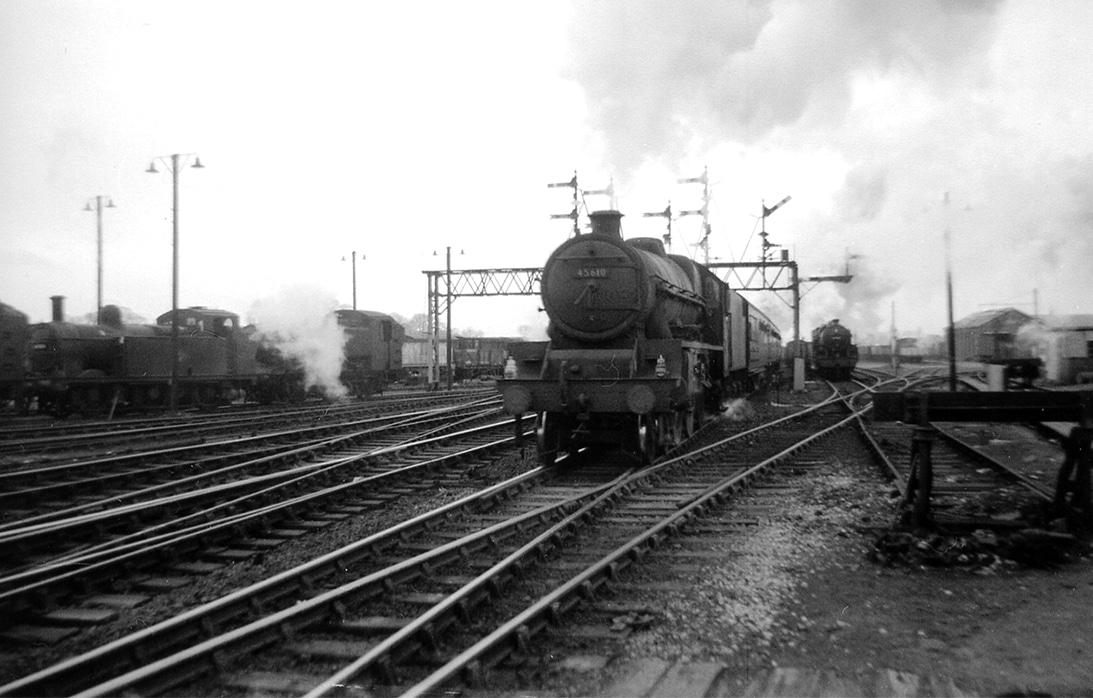 During 1964 most of the freight traffic was still entrusted to steam whereas the vast majority of normal timetabled expresses were in the hands of ‘Peak’ Type 4 diesels. However, due to diesel failures, many a steam engine saved the day and this is where my themed title of Golden Jubilee comes to the fore. All steam buffs are aware that the last few remaining LMS Jubilee Class 4‑6‑0’s had their swansong over the Settle & Carlisle, to and from Leeds, during the summer of 1967, but in my opinion 1964 was the last year that these handsome and much loved machines were still to be observed at work in any great numbers.

Between 16th and 30th April I noted the following Juilees which were either employed on express freights or standing in for ‘Peaks’ on express workings:

Other recorded sightings, mostly hauling various classes of freights, were as follows: