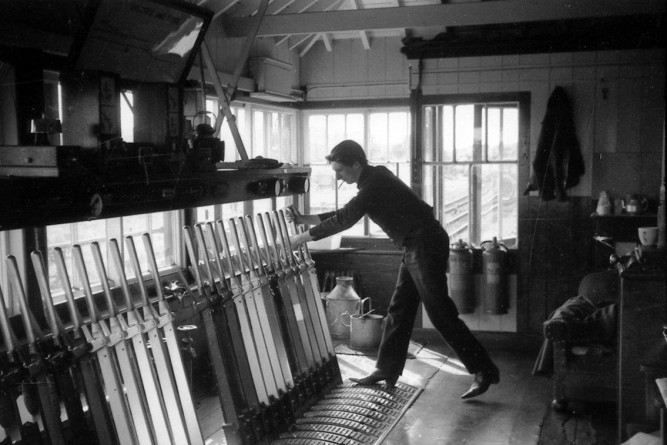 The track layout plan from Earlswood Lakes Signal Box – circa 1961

Although the goods yard had already closed and the tracks lifted one could still see where it had been and the loading deck was still in situ in 1965. 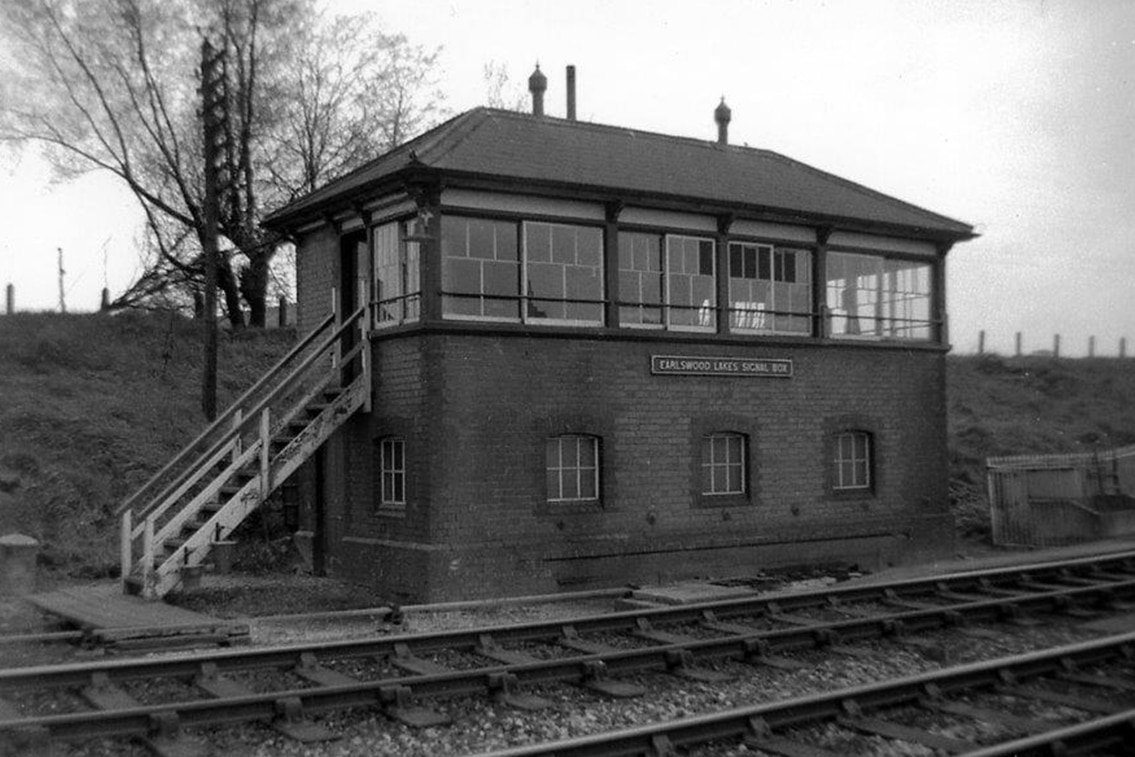 Situated at the summit of the inclines from Tyseley and Stratford‑upon‑Avon on the North Warwick Line the intermediate boxes were at Hall Green and Shirley – then Earlswood – Danzey (closed during 1965), Henley‑in‑Arden and Bearley Junction. 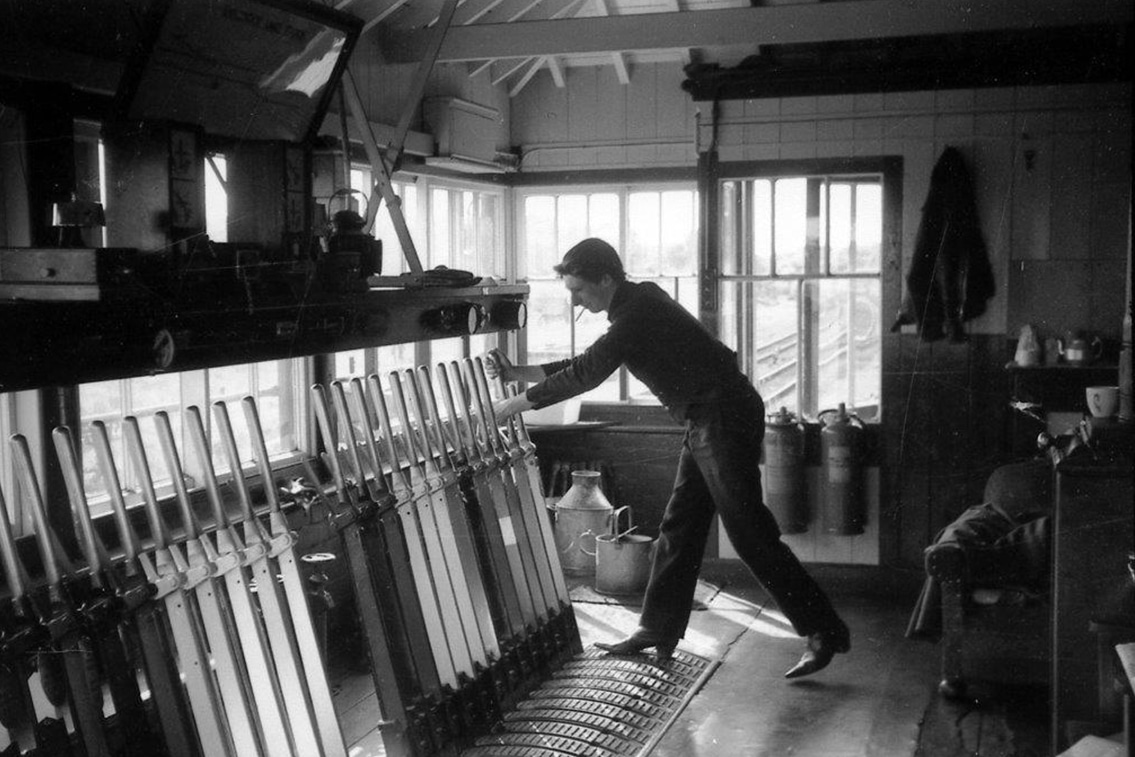 About to operate one of the up signal levers, cigarette in mouth and sporting ‘winklepickers’ (shoes), is Stuart the porter whom I last saw near Stratford‑upon‑Avon working with a road gang for the local Council in 1967 or thereabouts. On the up‑side, compared to Hatton (West), the box boasted electric lights and a modern coal‑fired stove. On the downside, however, there were no toilet facilities apart from those on the station and drinking water had to come on a regular basis from Henley‑in‑Arden in churns.

For the first week or so at Earlswood Lakes Signal Box I was employed on day shifts in order to familiarise myself with the workings of the same under the experienced eye of a senior relief signalman. It was obvious from the start that this Class 3 box was much busier than the one at Hatton (West). There were the local passengers, mostly DMU’s, but one particular working, the 7.06am from Henley‑in‑Arden to Birmingham (Moor Street), remained steam hauled until late September, if my memory serves me correct, hauled by members of the GWR 5100 Class 2‑6‑2T’s based mostly at 2A Tyseley. In addition there were freights a’plenty supplemented by holiday expresses and excursions during the summer months most of which, from all three categories, were in the still capable hands of steam.

There were only a small cadre of staff employed at Earlswood Lakes station. The ‘top man’ was the Stationmaster, Mr. King, a proper gentleman, who hailed originally from the Oakengates area of Shropshire and lived in a detached house in the Station Approach. In addition there was the porter, Stuart, previously mentioned, and an older chap who worked in the ticket office whose name, unfortunately, escapes me.

The title of the station, Earlswood Lakes, was somewhat of a misnomer, because the actual ‘Lakes’ themselves are approximately one mile further on towards Henley served by The Lakes Halt, still in use today as a request stop, so the unwary visitor from ‘across the pond’ having alighted at ‘Earlswood Lakes’ on his ‘must see’ mission to see ‘The Lakes’ must have been more than a little confused when informed of the true location. “Why on earth is it called ‘Earlswood Lakes’ station if it’s nowhere near The Lakes?” As clueless as the tourist as to why it was ‘nowhere near The Lakes,’ there would have been much shrugging of shoulders and scratching of heads followed by the blasé statement of ‘because it is’ leaving our friend from the great US of A shaking his head in disbelief at the ‘eccentricities’ of the British way of life.

My association with the North Warwick Line goes back many years and I spent many hours trainspotting at Shirley station from 1956, as a ten year old, onwards. It was here that I ‘copped’ my first GWR Grange Class 4‑6‑0, No. 6853 Morehampton Grange, from 84E Tyseley. On Saturday evenings during the summer timetables in the late fifties, Shirley was my ‘mecca,’ with a stream of holiday expresses returning from the West Country to Birmingham (Moor Street), Birmingham (Snow Hill) and Wolverhampton (Low Level) hauled by GWR Castles, Counties, Granges, Halls and Modified Halls, often double‑headed, with ‘rare cops’ from far‑away locomotive sheds at Exeter (St. Davids), Laira (Plymouth), Penzance and Truro. On one occasion I ‘copped,’ in almost numerical sequence, on consecutive expresses, three GWR Castles Nos. 5053 Earl Cairns, 5054 Earl of Ducie and 5055 Earl of Eldon – ‘happy days.’

Having digressed briefly we now return to 1965. After being passed as ‘competent’ to operate the Class 3 signal box at Earlswood Lakes, at the tender age of eighteen, which operated twenty‑four hours a day for six out of seven days, I and another signalman, Paddy, who was much older than me, worked twelve hour shifts each: 6am until 6pm (days) and 6pm until 6am (nights) – a 72 hour week! In the early hours of the night shift the intermediate boxes at Hall Green, Shirley, Danzey and Henley‑in‑Arden were switched‑out.

Because the continuous rising gradient from Tyseley was not particularly taxing for locomotives hauling freight trains there was no need for the services of banking engines, but from Stratford‑upon‑Avon to Earlswood Lakes (the summit) it was a different story and from time to time, depending on the load and the mechanical condition of some of the locos in charge of freights, bankers were stationed at Stratford‑upon‑Avon from 2L Leamington and after closure of the same in June the locos were supplied by 2A Tyseley. Some of these freights took almost an hour to reach Earlswood Lakes, whereupon, if banked, the banker would return from whence it came light engine.

Steam locomotives recorded at Earlswood Lakes between 18th January and the end of February 1965, are as follows:

In addition: Hall Class 4‑6‑0 No. 5962 Wantage Hall was observed (dead) being towed from 85A Worcester to Cashmore’s, Great Bridge for scrapping on 10th February.

In addition: Grange Class 4‑6‑0 No. 6848 Toddington Grange, from 85A Worcester, was observed on an LCGB special from Worcester on 6th February.

Although many of the locomotives recorded were from Midlands depots there was a fair cross‑section of examples from other areas: Cardiff to York – Didcot to Doncaster – Birkenhead to Mirfield  and Heaton Mersey to Workington.