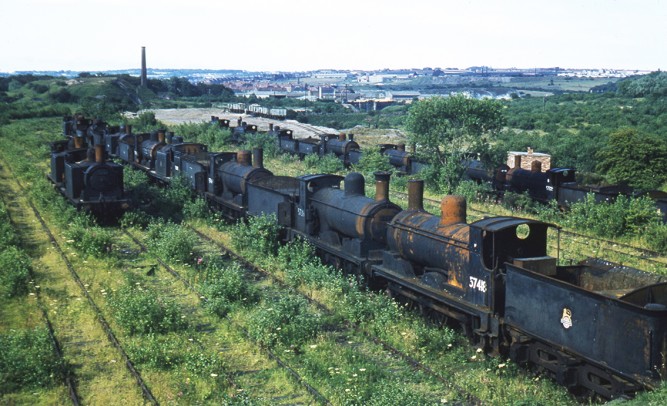 In my original WHTS series in the 1980’s I was led to believe from the reports of steam locomotive disposals contained within the pages of a variety of railway publications that the scrap metal merchants Messrs J.N. Connell and P & W Mclellan had two scrapyards each in the Glasgow area – Connell’s at Calder and Coatbridge – Mclellan’s at Coatbridge and Langloan. Some periodicals referred to all four yards whilst others were more ambiguous.

Thanks to painstaking research of Connell’s and McLellan’s yards by an enthusiast/historian who hailed originally from Wigston, Leicesterhire, we can now see things in a different light.

Not only does my correspondent give in‑depth descriptions, past and present, of the locations of the yards belonging to Connell’s and McLellan’s, but he has applied the same criteria to a number of other scrapyards in Central Glasgow, all of which, from an historical perspective, is priceless and I would like to take this opportunity to express my grateful thanks, not only for him sharing this knowledge with me, but for allowing me to impart the same to other interested parties.

POSITIONS OF SCRAPYARDS IN THE COATBRIDGE/AIRDRIE AREA

‘I visited the Central Scotland scrapyards in 1962‑1963 – by push‑bike – but unfortunately was never able to gain access to the yards. However, on my travels I acquired much in the way of important local knowledge the conclusions of which are as follows:’

‘These have all been amended on the WHTS website to “Atlas Works, Clarkston, Lanark.” Despite a diligent study of a six inch map of the area of the County of Lanark, I can find no reference to “Clarkston” or indeed any sidings of Works anywhere in the vicinity that could possibly  be associated with one and the same.’

The fact that G.H. Campbell’s address was Atlas Works in Clarkston, Airdrie, Lanarkshire is, I think, too much of a coincidence. Of course I have no proof of this and I suppose until someone comes forward and says that they saw one of the aforementioned locos in Campbell’s yard we cannot be 100% sure.’

‘Situated on the North side of the former Caledonian Glasgow to Airdrie and Newhouse line by the closed Calder station. Passenger services East of Langloan South Junction ceased during 1943 and line East of the Airdrie Branch Junction closed completely in the 1970’s.’ 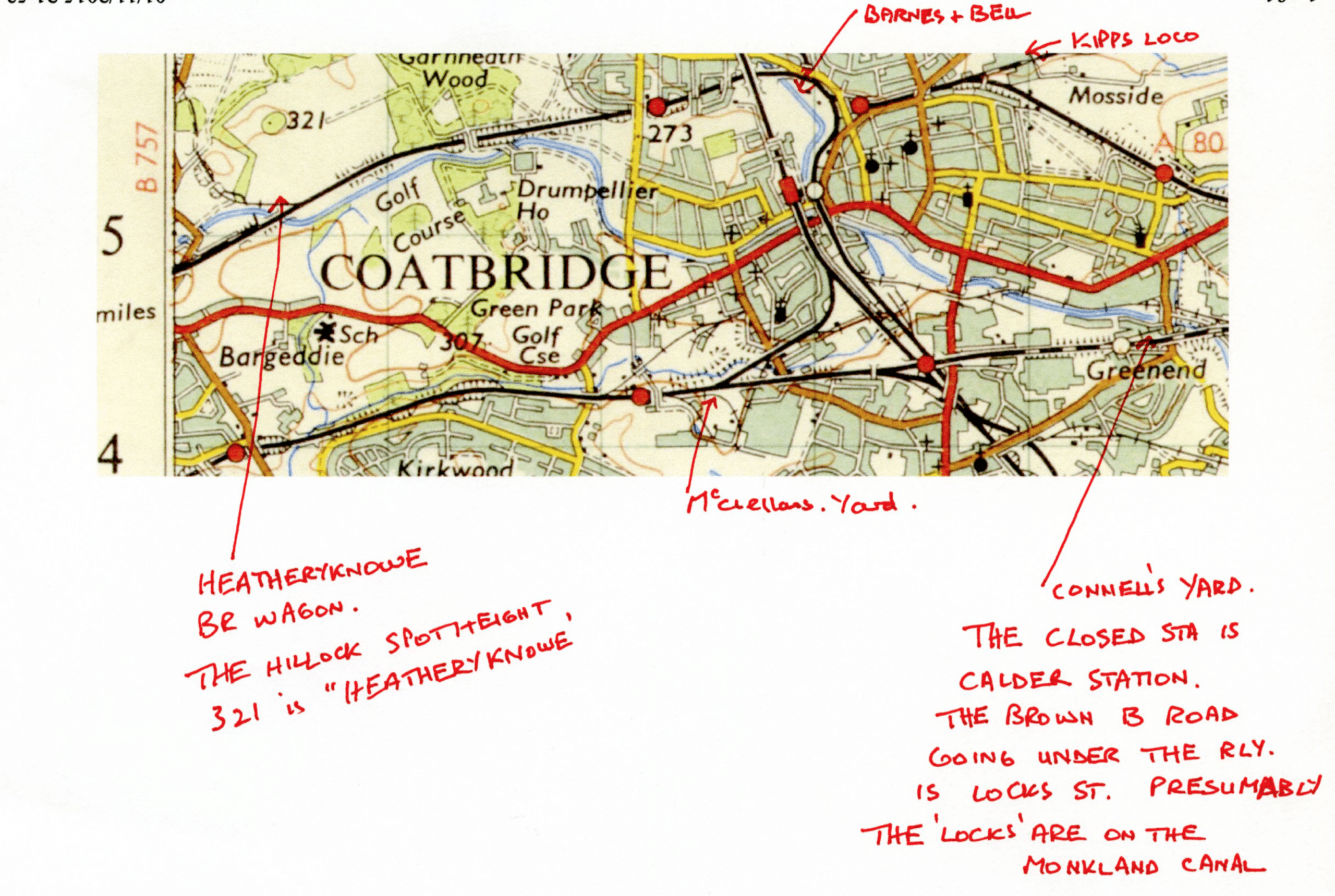 Map supplied by Roger Johnson via National Library of Scotland..

Peter and Walter McLellan (brothers) were a large steel merchants and fabricators in the Central belt of Scotland (as were Barnes & Bell) and scrap metal was only a relatively small sideline.’

‘The scrapyard was sited off the South side of the line 300 yards East of Langloan station and almost opposite Langloan South Junction and it signal box. The site is now an industrial estate. The line closed to passengers in 1964, but regained them in the late 1980’s/early 1990’s. Now forms an electrified triangle with the Perth‑Mossend‑Motherwell main line. Langloan station remained closed, but was replaced by a new station called Kirkwood 400 yards West of the former.’ 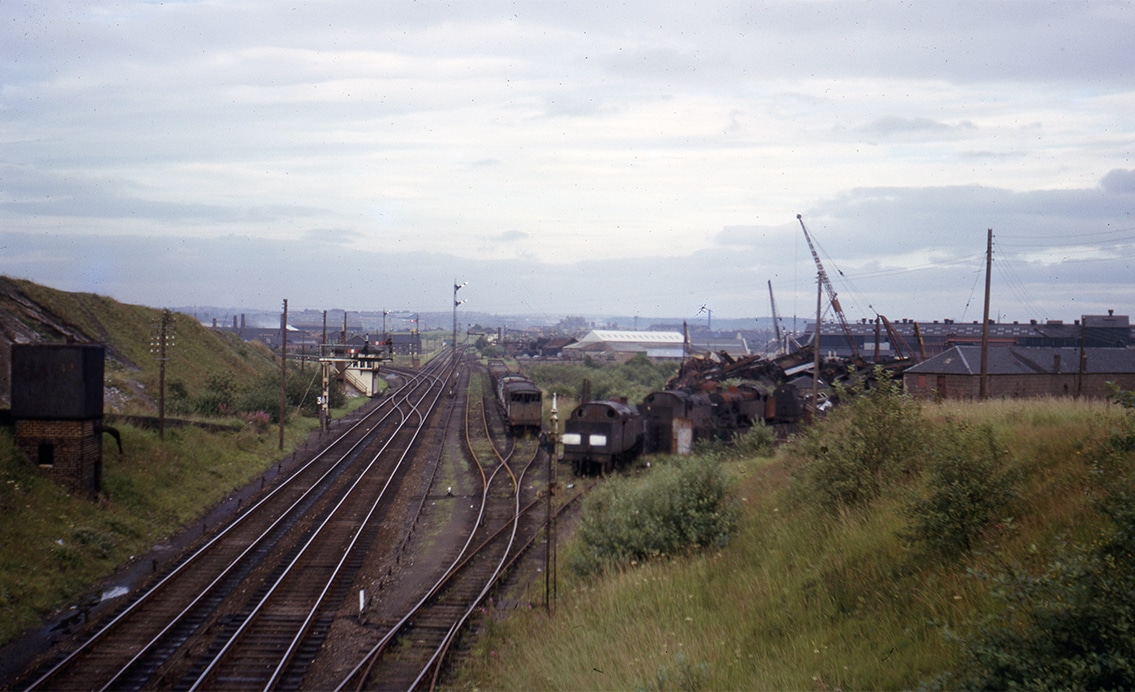 McLellan’s yard taken from the minor road overbridge by Langloan station. Langloan South Junction and its Signal Box can be seen in the middle distance and opposite is the siding and entrance to the scrapyard. Standing on the entrance road on 4th May 1963 are three LMS Class 4 (Fowler) 2‑6‑4T’s Nos. 42340, 42347 and 42402 latterly of 12E Barrow.

Situated on the south side of the former North British Railway line from Glasgow via Coatbridge (Sunnyside) to Bathgate, approximately half a mile west of the closed station at Clarkston and just east of the main Carlisle Road (A73) overbridge. The site is now a small lorry and container yard at the Carlisle road end, the rest derelict land. There was road access to the site at the corner of what is now Bankhead Place, and possibly also at the Carlisle Road end.

The line formerly carried a passenger service which terminated at Drumgelloch Station opened in 1989 to serve a large residential area, a quarter of a mile west of the former Clarkston station, closed in 1956. In recent years the line has been electrified and reopened as a through route from Glasgow to Edinburgh via Airdrie and Bathgate. At the same time the “new” station at Drumgelloch was closed  and another “new” Drumgelloch station, with a large commuter car park, reopened more or less on the site of the original Clarkston station. Scot Rail has retained the name Drumgelloch as there is another Clarkston station south of Glasgow on the East Kilbride line, which it thinks might confuse passengers!

“N.B Campbell’s had another yard – at Shieldhall, Renfrew.”

Map supplied by Roger Johnson via National Library of Scotland.

‘Sited off the South side of the former North British line about 300 yards West of Coatbridge (Sunnyside) station adjacent to the former Caledonian line overbridge. The site is now part residential and part of the North end of the Summerlee Heritage Museum.’

‘Henderson’s yard was situated in the disused goods yard adjacent to the north side of  Airdrie (ex N.B.R.) Station. Access was from a siding under the road bridge carrying Craig Street, 300 yards to the west of the Station. Former Haymarket A3 60094 and A2 60537 were the only known loco scrapped here in 1964. The site is now part of the A89 Airdrie ring.

‘Always noted as in “Glasgow” (WHTS and others). Though out in the sticks, it is technically now part of the North Lanarkshire Administration area. Back in time though it was within the Coatbridge Council area, only one and a half miles West of Coatbridge (Sunnyside) station. The Works was on the North side of the Glasgow  (Sunnyside) line at the junction of a branch which struck off North to two long closed collieries. Today there is no evidence of the existence of the sidings or the branch.’

‘Until my recent visit, I had no idea where this yard was located. However, in August (2015) I was photographing Langloan South Junction from the road bridge to the West when an “old boy” started chatting. I showed him the photo of McLellan’s yard from the same bridge in 1963. He said he remembered it and knew someone who had worked there. I asked if he knew where Ward’s, Langloan yard was? “Yes it was in a siding which went North East off the line just West of Langloan station.” (100 yards behind where we were standing.). “But ye will nae find it noo.” I didn’t try to, but at least I now knew its rough location. The area is now residential.’

‘Not a scrapyard, I know, but having seen recent reports that are wrong about the location of the dump I would like to set the record straight. About one and a half miles South of Coatbridge (Sunnyside) the former North British Hamilton branch now joins the ex. Caledonian line to Motherwell at Whifflet South Junction. Before that connection junction the Hamilton Branch rose and crossed the CR line by an overbridge. Around 400 yards beyond a North facing junction of a colliery line to Rosehall pit came in from the West. Carnbroe sidings were in the “V” of that junction.’

‘I presume that the sidings were there as a concentration point for all wagons to and from several coal mines in the vicinity, by then all closed – hence the loco dump. Beyond these sidings the tracks to Hamilton and the colliery were lifted. Perhaps the confusion about the location is the fact that there is a large housing estate about half a mile away on the other side of the river and the former Caledonian main line is called Carnbroe.’ 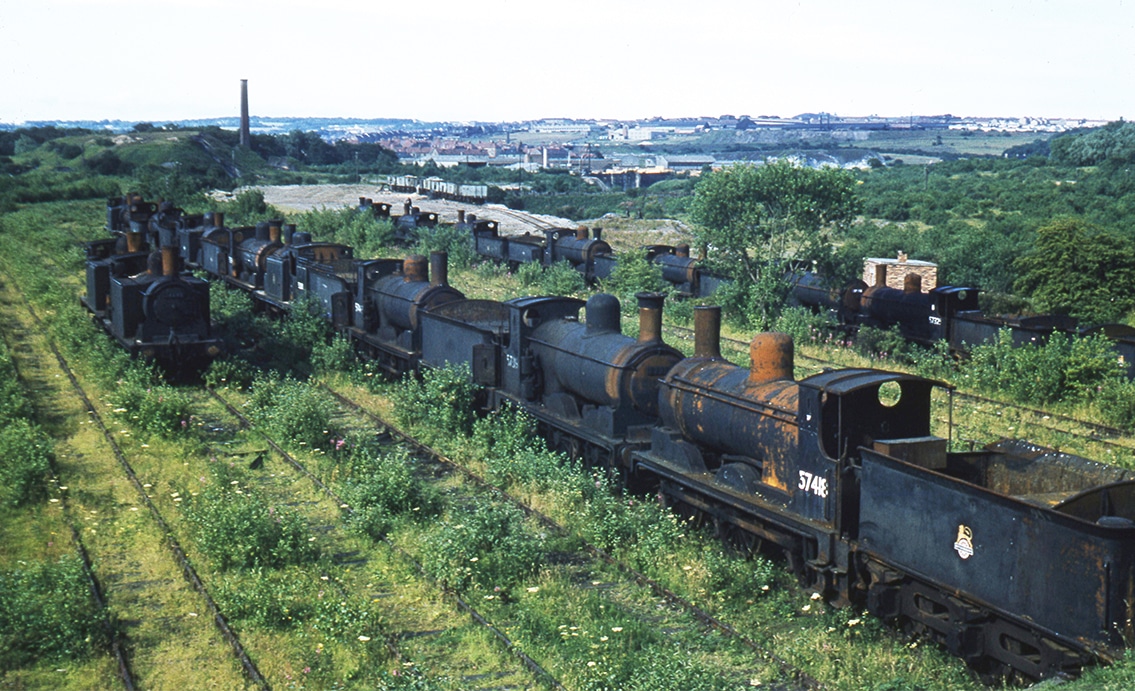 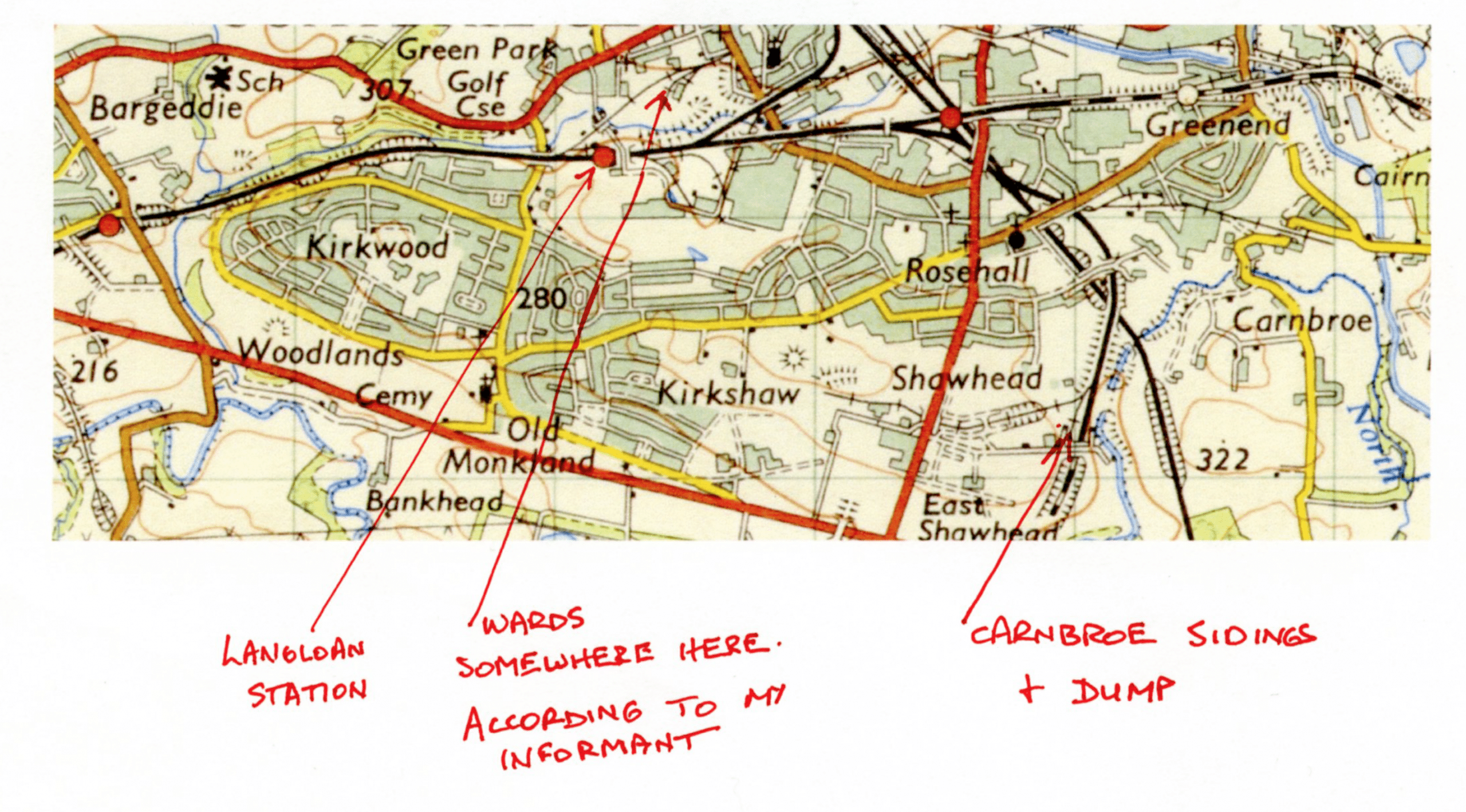 Map supplied by Roger Johnson via National Library of Scotland..

‘The area around Coatbridge and Airdrie once had an absolute maze of lines and I could never understand how the LNER had a Motive Power Depot at Kipps with around fifty locomotives on its books whereas the LMS had no depots in the vicinity despite having just as much track; maybe they sent a procession of “Jumbos” up from Motherwell every day to work in the area!’