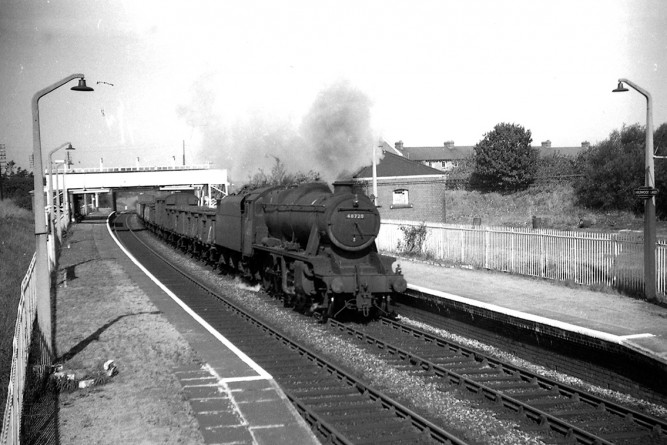 With autumn on the horizon and the winter timetable looming the North Warwick line was to bid farewell to steam on the 7.06am Henley‑in‑Arden to Birmingham (Moor Street) local passenger on which the erstwhile GWR 5100 Class 2‑6‑2T’s had held sway for so long. Also destined to lose steam haulage, possibly until preservation days, were the summer holiday expresses from Wolverhampton (Low Level) to Kingswear and return. On the plus side most freights were still in the capable (for the most part) hands of steam.

As possibly been previously mentioned, a freight passing Bearley Junction would take around fifty minutes to reach the summit of the climb at Earlswood Lakes. One particular night, nearly an hour had passed with no sound or sight of a freight I was expecting and as I was contemplating stopping a Stratford‑bound freight which was due, I heard the faint chugging of a steam loco coming from the direction of Henley. My mind at rest, I let the other freight go by unhindered. However, as the minutes ticked by all was silent again and I began to wish I had stopped the other freight and asked the driver to keep a lookout.

Before deciding on any further action I spotted a light from a hand‑lamp in the distance. Much to my relief, its owner was the driver of the missing freight which had run short of steam about a mile away and he had left his fireman to make amends. The driver was obviously not a ‘happy bunny’ with his steed, as before he left my signal box he said in a lilting Welsh accent: ‘Bloody steam engines, I’m on the Margam tomorrow and thank goodness I’ve got a diesel.’ Eventually the fireman raised enough steam and the train cleared my section.

The following day, sure enough, there he was giving me a cheery wave as he passed by comfortably seated in the cab of a Class 47 Brush Type 4 diesel. He did not smile for long though; before his train reached Tyseley the brakes on the loco seized and he was stranded again!

Despite the lack of attention and general run‑down of the surviving members of the WR steam fleet I rarely had a failure or many examples of having to set trains back into the sidings for a ‘blow‑up.’ Despite the fact that many of these footplate crews were shortly to lose their jobs, I must pay tribute to the way in which the majority attempted to keep ‘right time’ with their uncared‑for charges. Redundancy was scant reward for their efforts.

On the trainspotting scene I did two major ‘shed bashes’ in September, both utilising my ‘sit‑up‑and‑beg’ Ford motor car. The first, on 12th and 13th was what I referred to as the ‘Twelve Counties Tour’ encompassing Warwickshire, Staffordshire, Cheshire, Lancashire, Westmorland, Cumberland, Northumberland, Durham, Yorkshire, Nottinghamshire, Derbyshire and Leicestershire – a total of 625 miles and with no mechanical failure to boot with my ‘trusty steed’ – happy days

The second bash, a visit to the last surviving ‘strongholds’ of steam in South Wales on 19th was a different kettle of fish. As I set off from home a ‘red light’ lit up on the dashboard but I chose to ignore it. (I later found out that the red light meant that the brushes on the dynamo were worn and as a result the six‑volt battery was not charging.) Each time we stopped the car and cut the engine it had to be ‘bump‑started.’ Apart from the physical inconvenience this presented no problem, even when sidelights were employed as dusk fell. However, when it came to ‘headlights’ the engine died through lack of power. An emergency battery charge at a garage got us home at the expense of wrecking the battery – ‘not so’ happy days!

Locomotives recorded at Earlswood Lakes during September, mostly on freight workings, were as follows: 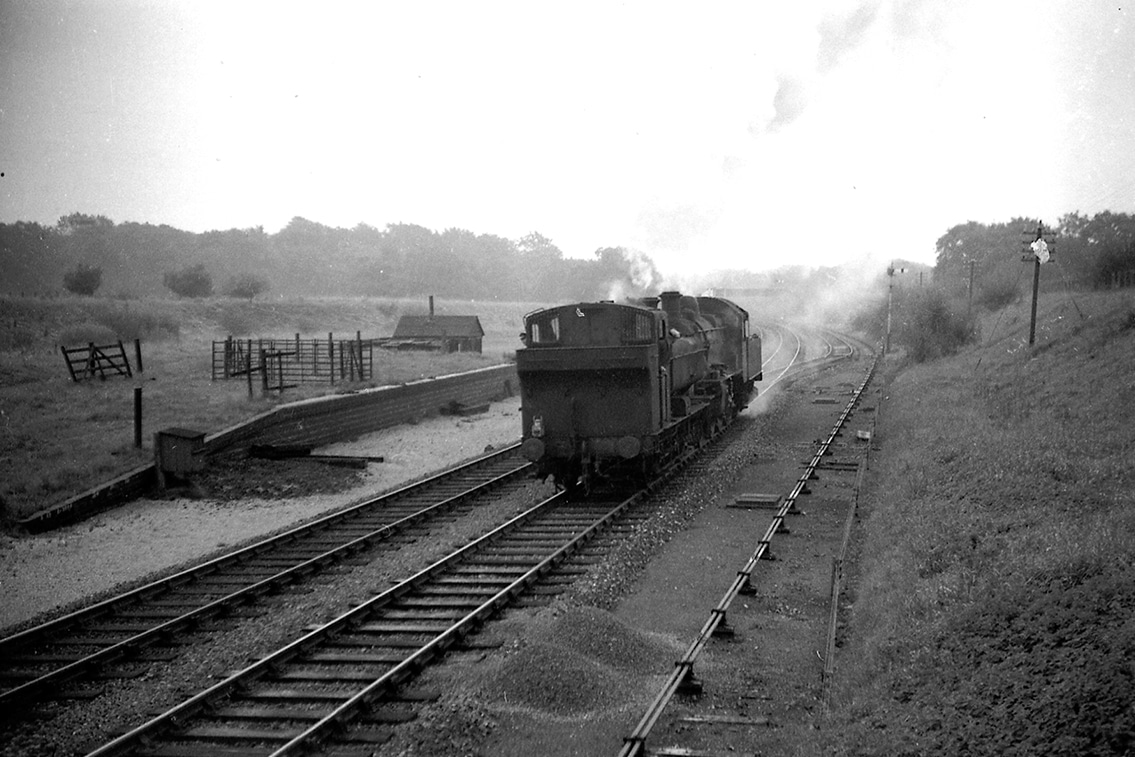 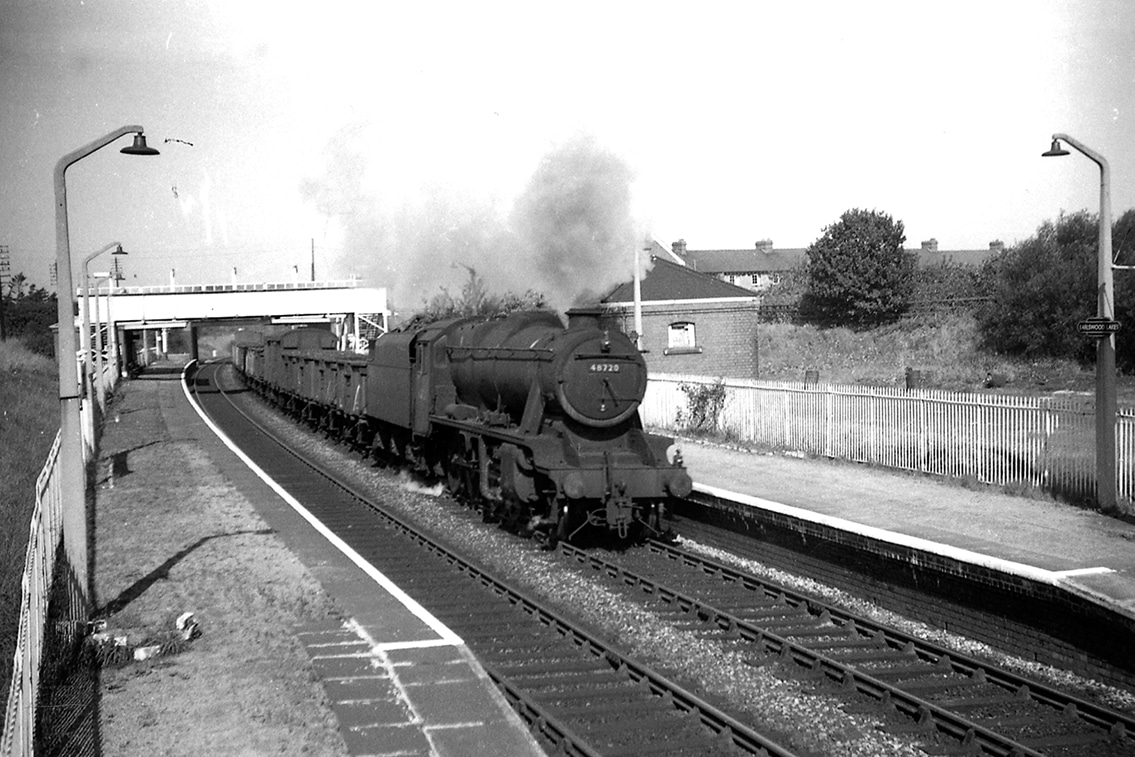 September 22nd September 1965 was bright and sunny as LMS Class 8F 2‑8‑0 No. 48720, from 9H Patricroft, reaches the summit of the long climb from Tyseley to Earlswood Lakes with a down mixed partially fitted freight. 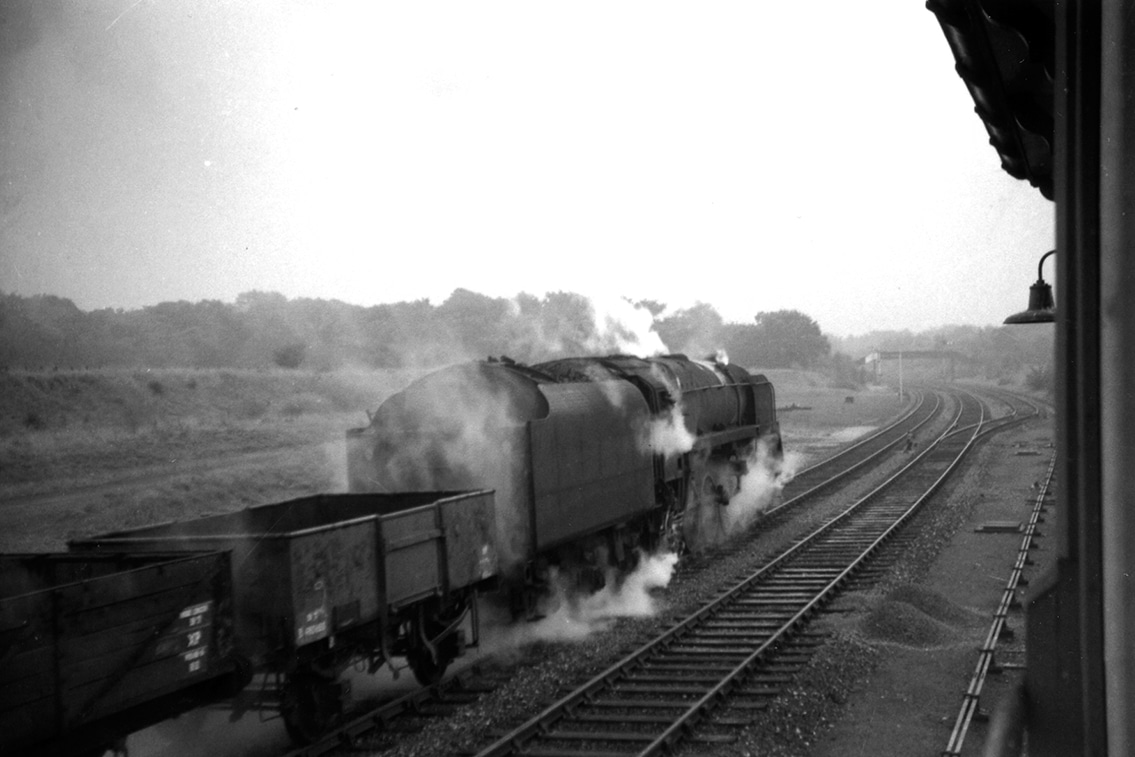 The autumnal mists prevail again as BR Class 9F 2‑10‑0 No. 92138, of 2E Saltley and shrouded with steam, passes Earlswood box with a southbound loose‑coupled freight on 24th September 1965. No. 92138 a longstanding inmate of Saltley parted company with the same in August 1966.

As can be seen from the above there was still a wide selection of former GWR locomotives available albeit mostly from the likes of Tyseley and Oxley. The WR sheds were becoming few and far between with only Bristol Barrow Road, Newport (Ebbw Junction), Oxford and Worcester represented. The LMS contingent was plentiful with examples observed from places as far apart as London‑Manchester and Annesley to Fleetwood. Mold Junction provided no less than four different locomotives. BR engines, 9F’s in particular, were well to the fore although not a single one was recorded from South Wales depots. The highlight of the month without a doubt was the rare appearance of a WD Class 8F 2‑8‑0 from Doncaster.

Mar 2, 2017WHTS
SCRAPYARDS AROUND GLASGOW Part One - By Roger Johnson & foreword by Peter HandsFrom the spotting notes of Peter Hands – 22nd August – observed on this date in West Germany 1973