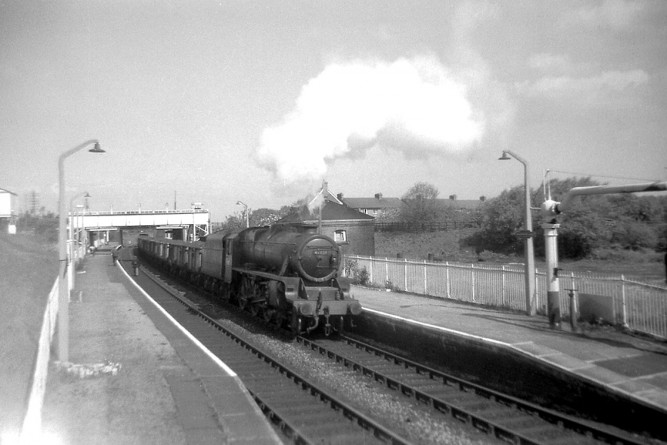 The month of May saw me purchase my first motor car, a ‘sit‑up‑and‑beg’ Ford from my brother‑in‑law for the princely sum of £50.00. In retrospect I wish I had not because I had nothing but trouble with it over the following months – punctures – broken crown wheel and pinion – a piston failure – flat battery and finally, a seized‑up engine. Having had a few driving lessons prior to purchasing this ‘pig‑in‑the‑poke’ I passed my driving test first time during May (in the instructor’s Triumph Herald) and somehow, in between the various breakdowns etc., I managed to do some shed‑bashing trips in it, the first being to Bournemouth on 23rd May. 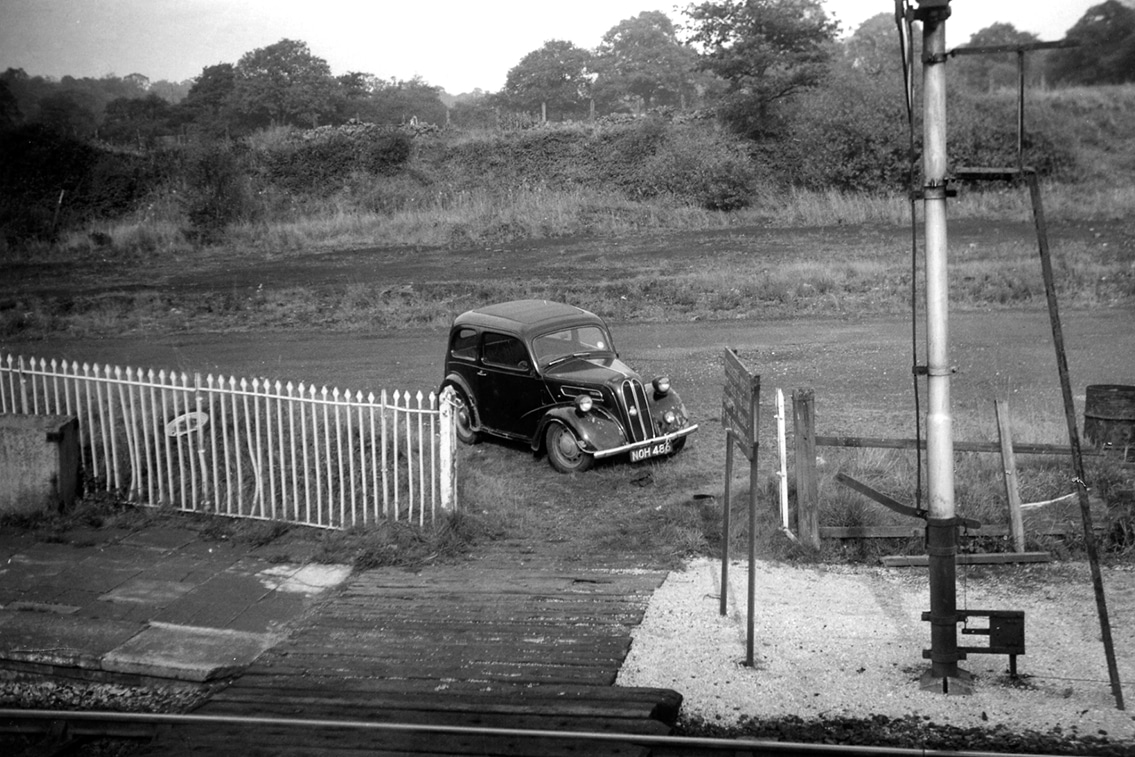 My first car a 1950’s Ford Popular registration number NOH 486 photographed in the long‑closed goods yard opposite the signal box at Earlswood Lakes.

I also took my motor‑cycle test in May, but, unlike the car test which went smoothly, it was a disaster. A day or two before the test my Tiger Cub had a mechanical failure. Salvation was at hand, or so I thought, in the shape of Stuart, the station porter, who owned a bike the same make as mine. Unfortunately, unlike my steed, his bike was somewhat temperamental. Each time I stopped during the test the engine cut out but the ‘coup‑de‑grace’ was the ‘emergency stop.’ Not being used to his brakes I applied them as I would have done with my own, sensibly, only to leave a lengthy skid mark on the tarmacadam for which the driving examiner was not at all impressed and handed over, with the solemnity of a ‘funeral director,’ the failure sheet. All was not lost though for being back in possession of my own Tiger Cub I passed the test second time around.

Returning to the railway scene, there was a strong rumour, via the Stationmaster, Mr. King, that all of the Stationmaster’s along the North Warwick Line were to be made redundant, being replaced by a single ‘line manager.’ To me, looking back, this was the beginning of the end of the ‘human aspect’ of British Railways, because basically, line managers’ were just an extension (accountants) of Doctor Beeching and all that he stood for. I cannot remember exactly when this change in practice occurred, probably in June or July at the latest, but Mr. King retired and although he retained possession of the station house I hardly ever saw him again afterwards – a great shame.

On a lighter note, having mentioned in Part three that I was lumbered with the errant radio station from Luxembourg, I kept trying to tune into the new ‘Pirate Stations’ of the ilk of Radio Caroline, but to no avail, until one day, having placed my transistor radio (the battery of which was almost as big as the radio itself) next to where the power lines came into the signal box – bingo – a perfect reception. What a revelation the ‘Pirate Stations’ were – they had fantastic music and basically were not taken off the air until after BBC Radio One commenced broadcasting pop music in 1967. However, by utilising the power lines in the box it created a ‘some you win and some you lose’ situation – the battery was quickly drained of power and I had to replace it every few days with a new one, which cost a fortune in 1965.

May was a busy month for steam. The 7.06am Henley‑in‑Arden to Birmingham (Moor Street) was still in the hands of the sturdy and reliable GWR 5100 Class 2‑6‑2T’s, most of the freights continued to be  steam hauled and on at least one occasion an excursion was entrusted to steam.

Steam locomotives observed in May: 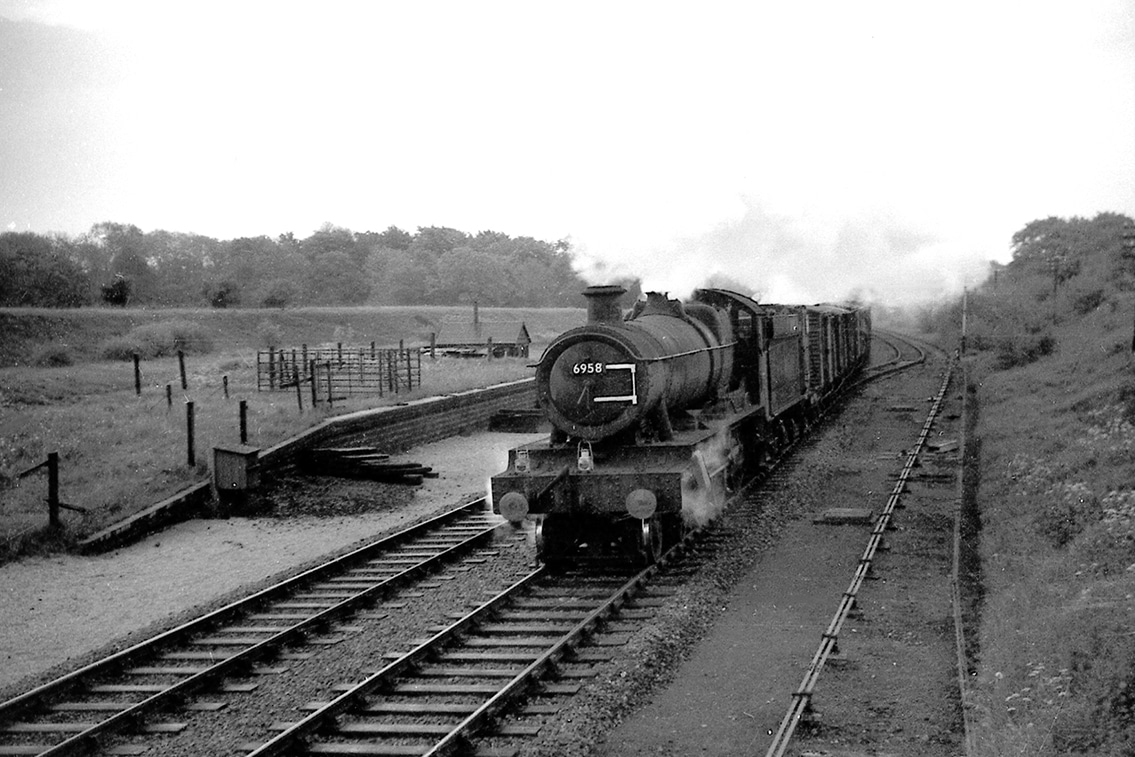 GWR Hall Class 4‑6‑0 No. 6958 Oxburgh Hall, from 85A Worcester, passes the disused cattle dock and has steam to spare as it breasts the summit of the long climb from Stratford with an up fitted freight on 27th May 1965. The refuge siding in the right of the frame rarely saw any use apart from freights being set‑back to allow engines short of steam to have a breather. 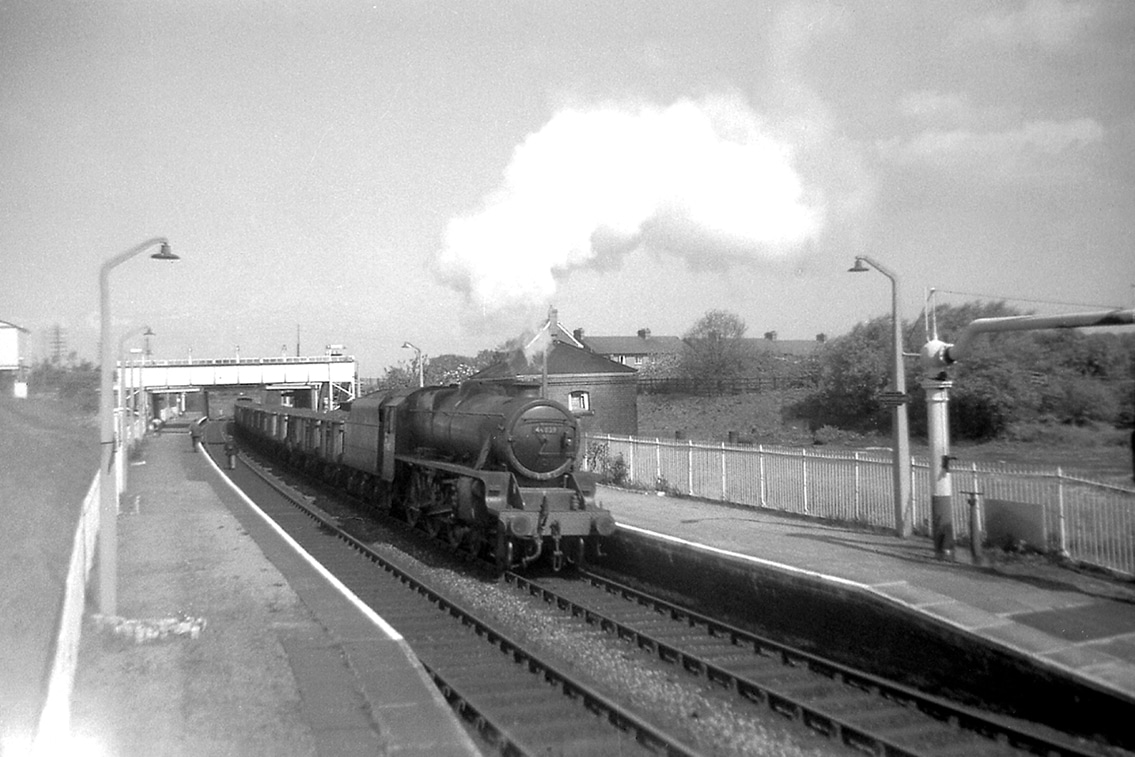 LMS Class 5 4‑6‑0 No. 44839, of 16F Burton and looking in fine external fettle, glides through Earlswood Lakes station with a rake of loaded mineral wagons on 19th May 1965. The water tank, water column, footbridge and station buildings are but a distant memory as is No. 44839 withdrawn from 9F Heaton Mersey in December 1966. 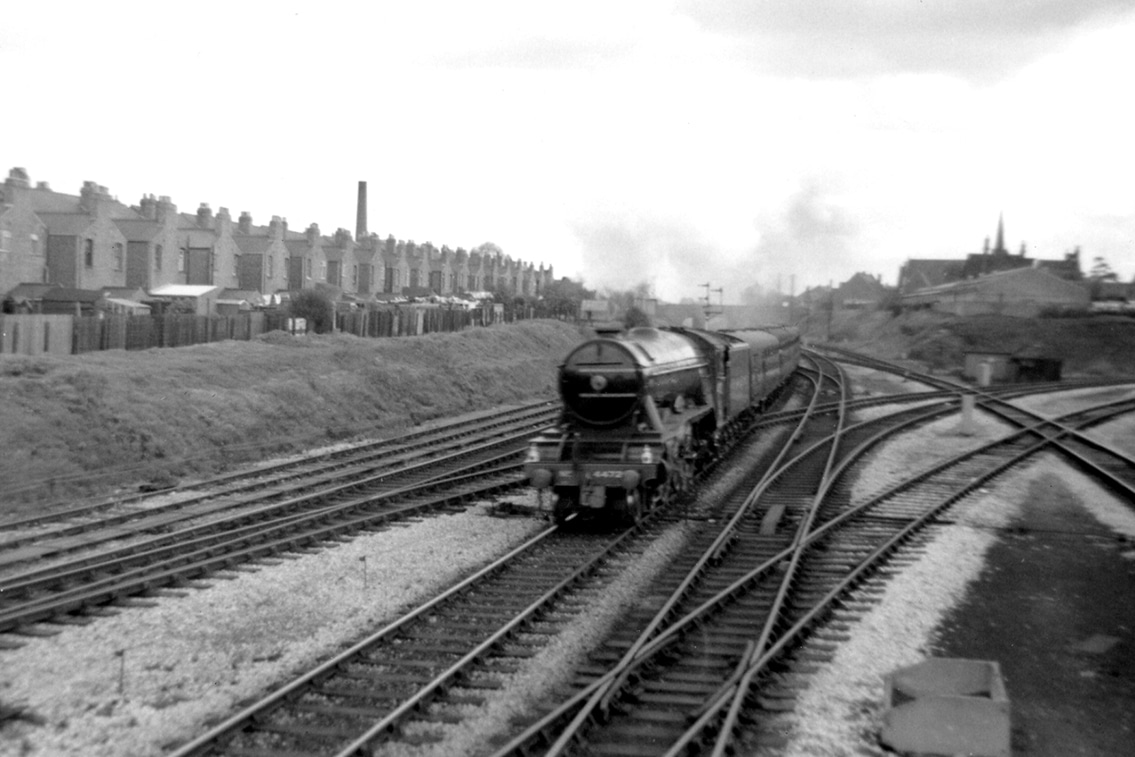 With a clear road ahead GWR Modified Hall Class 4‑6‑0 No. 7924 Thornycroft Hall, from 82E Bristol Barrow Road, approaches Earlswood Lakes Signal Box in a flurry of white smoke after the long climb from Stratford‑upon‑Avon with an early morning up fitted freight from Tavistock Junction on 19th June 1965. Note the home‑made smokebox numberplate.

Notable by their absence during May were locomotives from far‑flung parts of the BR system, Llandudno Junction being an exception. Examples from the surviving Western Region depots in England and South Wales were still well represented. Of the remainder, many were locally based at Bescot, Oxley, Saltley and Tyseley. The appearance of no less than five GWR 38XX series of 2‑8‑0’s in May proved to be somewhat of a ‘swansong’ for them. A sign of the times and the run‑down of steam was evident by the lack of nameplates, sporting home‑made smokebox numbers and engines, in many instances, being neglected externally.