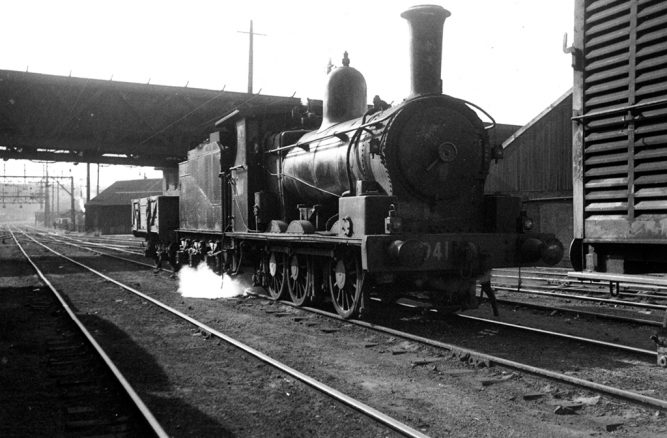 By the early autumn of 1965 whilst still employed as a Class 3 signalman at Earlswood Lakes Box it was becoming obvious that the writing was on the wall for the end of steam on the North Warwick Line coupled with the rumours that BR (Doctor Beeching) wanted to close this route, something it eventually succeeded in doing between Stratford‑upon‑Avon and Cheltenham. Like many a railwayman in the mid‑sixties I was becoming disillusioned as to what the future would hold.

Quite by chance, whilst on a visit to Birmingham, I met up with a former colleague, Mick Black, whom I had worked with at an Insurance Company in 1962 and 1963. He too had been looking for a new start in life along with a pal of his, Ted, and had decided to apply to emigrate to Australia. To cut a long story short I too decided to up sticks from the UK and join them on this venture into the unknown. Whilst I was still aged nineteen both Mick and Ted were a couple of years older.

So it was that we made our departure from these shores and our loved ones and departed from Heathrow Airport in a Boeing 707 on a freezing 14th January 1966. Our destination was Sydney, New South Wales via Zurich, Beirut, Karachi, Calcutta, Singapore and Darwin.

Upon arrival at Sydney Airport we were taken to our first place of residence, a men only hostel for emigrants from the UK at Neutral Bay, close to the Harbour Bridge. Our stay was brief for it was not long before we rented a place of our own a semi‑detached bungalow at Watsons Bay near to the Sydney Heads. 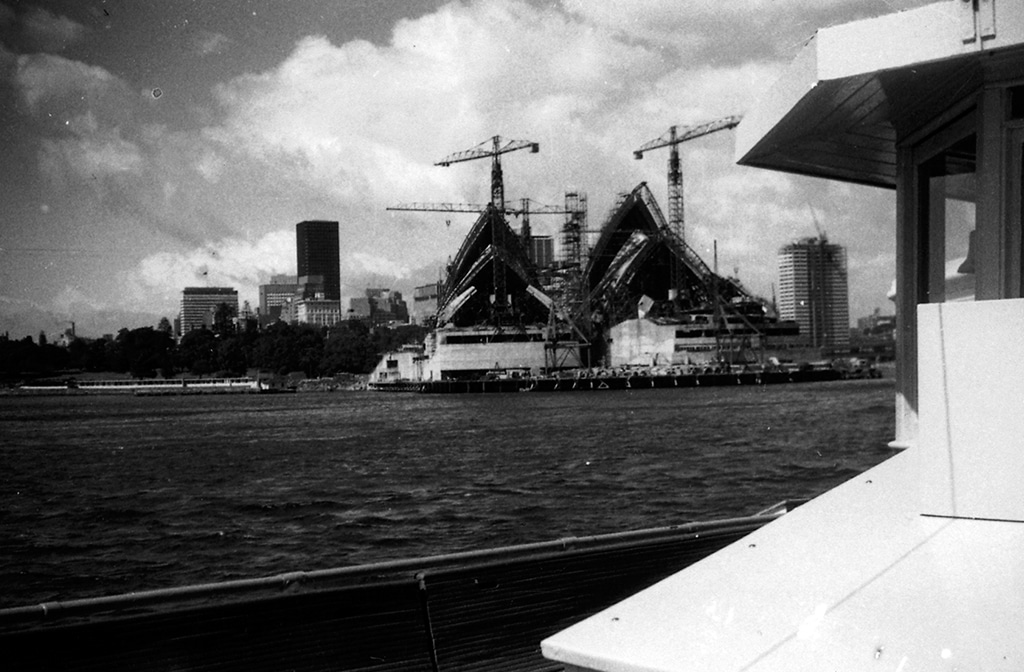 Taken from a ferry between Neutral Bay and Circular Quay on 17th January 1966 the opera house was in the throes of being constructed and one can only assume that in 2016 it is celebrating its Golden Jubilee.

Joining the New South Wales Government Railways in January I was briefly employed as a cleaner at the large Motive Power Depot at Enfield but this was short‑lived and my enthusiasm curtailed when I was transferred as a cleaner to the near‑at‑hand Diesel Depot (DELEC). I escaped the boredom of the latter location after applying for and succeeding to obtain a job as a shunter. I did not know it at the time but working in different shunting yards gave me the unique opportunity to take photographs in locations denied to the general public – history in the making I suppose.

Shunting in the yards at Sydney was an extremely dangerous vocation in 1966 and one of the yards I worked in I absolutely hated – this being:

This was a very long yard, but quite narrow and accidents (collisions) were a common occurrence. On one side of the yard were grim smoke‑stained warehouses (especially forbidding and depressing at night) whilst on the other side there was a section which held multitudes of wagons in numerous sidings. Collection sheds of all shapes and sizes were scattered around the edges of the yard and to me it seemed that chaos reigned supreme. There did not appear to be any order or discipline. How on earth goods transhipped through Darling Harbour yard reached their destinations is still a mystery to me fifty years later. To add to the doom and gloom at each end of the yard were smoke‑filled tunnels – stygian hell‑holes.

Today, Darling Harbour Goods Yard no longer exists. It was swept away many years ago being replaced by a modern shopping complex. Although I disliked the yard I am glad I took a couple of photos of it. At the very least it bears testimony to the fact that it once existed.

I liked working at Darling Island Goods Yard. It was small and compact and in the main open to the skies with Docks on the one side. In 1966 the British Merchant Marine ruled the waves and the majority of ships that docked in Sydney were British. This was the year of the bitter shipping strike in the UK and for weeks and months the docks at Darling Island lay empty with little employment for the dock force. 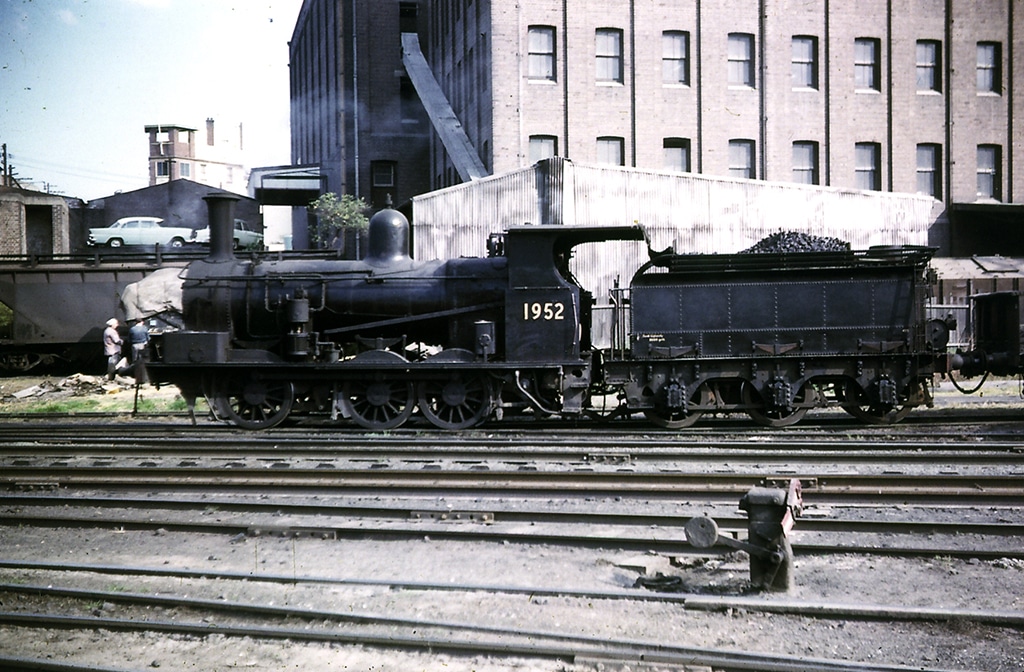 All in all I logged a total of eighteen of these 0‑6‑0 locomotives.

ROZELLE – except where stated all the photographs were taken between May and July 1966.

The Goods Yard I loved to work in most of all was at Rozelle a twenty minute bus ride from the centre of Sydney. Split into two sections divided by a bottleneck it was immense but spacious and the staff employed here were, for the most part, friendly and helpful and I quite often went with a number of them for a schooner of beer at the near‑at‑hand White Bay Hotel after the shifts ended. 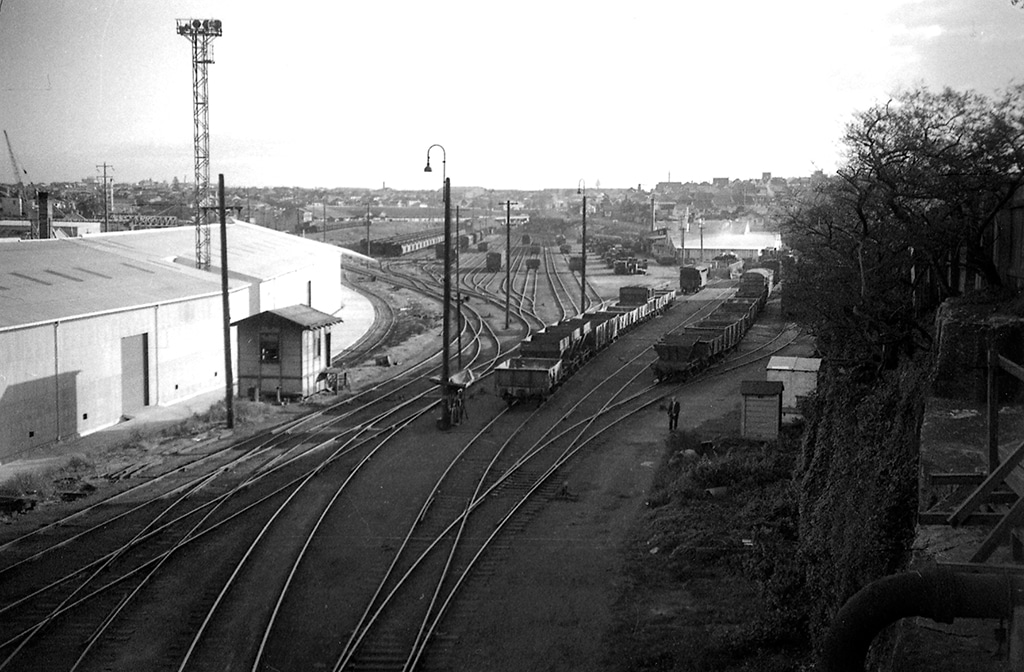 This view is taken from the overbridge at White Bay, Rozelle on 9th May 1966. Immediately in front of us is the ‘cripple yard.’ In the left hand side of the maze of lines in the distance are ‘trains’ of coal hoppers. Some would be full and waiting to be hauled to the upper yard whilst others would be empty and awaiting return to the New South Wales coalfields. Note the ‘bottleneck’ between the lower and upper yards.

I will now return to the theme of the trains of coal hoppers mentioned early. The lengthy hoppers, loaded with coal slack for export to Japan, that arrived in the lower yard at Rozelle were divided into two and taken up the incline to the upper yard. They were then sub‑divided and shunted onto a raised line which led to a metal unloading shed. Two at a time were allowed into the shed. The hopper doors underneath would be opened and the majority of the coal slack would drop onto the conveyor belts taking the same to the Japanese ship. Metal grabs then came down and seized the wagons shaking them violently in order to release the remaining slack. The noise and the dust were a sound and sight that one had to witness to be believed – health and safety!!!!

We take our leave of Rozelle and head for our final destination:

Unfortunately I was unable to photograph any of the following Classes of locomotives that I saw in Sydney:

My tenure as a railwayman in Sydney came to an end in August 1966 when I decided to head back to ‘blighty.’ Instead of returning to the UK via the same route which had brought me to Australia the route I chose was across the Pacific – Fiji – Honolulu – San Francisco and thence to Vancouver and by train across Canada to Toronto where I would meet up with my sister and brother‑in‑law who had emigrated to London, Ontario in July 1965.

Departure from Sydney was 7.00pm on the Friday – having crossed the international dateline time reversed for twenty‑four hours – and arrival time in Vancouver was 9.00pm on the same Friday. Most disconcerting to say the least!!!

After three months in Canada working in casual jobs such as laboring on a building site and fruit picking I decided enough was enough and returned to the UK via Prestwick and Heathrow.

Whilst travelling on the coach from Heathrow to Victoria bus station I had an occasion to glance over the parapet of a railway bridge. Did I ‘imagine’ it or was I ‘hallucinating’ because of ‘jet‑lag?’ What I ‘thought’ I had seen was a GWR 57XX 0‑6‑0 Pannier Tank – no it could not have been. The last BR example was long withdrawn.

It was only years later that it dawned on me that the ‘Pannier Tank’ I saw was ‘real.’ It, of course, belonged to London Transport.

Upon my return to the Midlands via Paddington and Birmingham (Snow Hill) I applied to join British Railways again, but to no avail – the ‘Beeching Axe’ was in full swing. Instead a career in the Fire Service beckoned. In later years I turned my hand to writing and ‘What Happened to Steam’ was born in 1980.